Berlin – The Capital of the Digital and Creative Scenes

Unemployment is falling; the increase in working population is highest in Berlin, and in terms of economic growth, Berlin counts among the leading locations for the digital and creative economy in Germany. Compared to the analysis of economic data for the years 2014/2015, Berlin continued the upward trend with regard to corporate, employment and sales figures.

Between 2014 and 2015, the number of companies working in the field of ICT, media and creative economy has increased by 3.7 per cent. The two sectors of software/games and the performing arts were the industries with the strongest contribution to the increase in the number of companies (software/games: 7% ; performing arts: 6% increase). The growth of new start-ups from 2015 to 2016 was accompanied by a rise in employment of 7 per cent to 185,600 employees. Besides the software/games (13.7 per cent) and the architecture market (10 per cent), the advertising market (9 per cent) has grown considerably.

Berlin compared to the rest of Germany

About 5 per cent of the nationwide sales volume is generated in Berlin. The sales share in the music industry (21 per cent), the performing arts sector and film industry (with 14 per cent each) are far above-average.

Annual Results for 2017 supplied by Berlin Partner for Economics andTechnology

The continuing upswing that is seen in the Berlin economy is further supported by the annual results for economics and technology supplied by Berlin Partner for 2017. Furthermore, the digital industry provides for the highest growth in jobs. 2,976 jobs will be created in the projects supported by Berlin Partner in the ICT, media and creative sectors. This is about one third of all jobs. Additionally, many jobs are created in the fields interfacing with the digital economy, such as the transport and services sector.

According to forecasts by IBB’s economists, the additional investment and employment effects initiated by Berlin Partner and the acquired third-party funds amounting to 118.2 million Euro will certainly have a medium-term effect on the overall performance of the Berlin economy. Thus, the gross domestic product is expected to increase by 1.5 billion Euro between 2017 and 2019.

“We look back on a very successful and economically strong year 2017. The capital’s economy is continuing to develop dynamically and acts as a significant job creator. Berlin Partner has successfully implemented its task in 2017 as a company devoted to the promotion of business and technology. The investment volume was again very high, and never before were more jobs created through settlement and expansion projects initiated by Berlin Partner than in 2017”, states Christian Rickerts, State Secretary at the Berlin Senate Department for Economics, Energy and Public Enterprises.

How is the creative industry developing in Berlin?

If one is solely interested in the economic data for the creative industry, then the third <link file:11500>creative industry report 2014</link> issued by the Senate Department for Economics, Energy and Public Enterprises in consultation with the Senate Chancellery – cultural department of the Senate Department for Urban Development and Environment provides comprehensive information. The report contains a wealth of detailed investigations into each sub-sector of the creative industry and special topics such as spaces, income trends, cross innovations, culture, and tourism.

Here are the figures on the creative industry in Berlin at a glance:

Both the creative and digital economy ensure that the German capital region is a leading location for the digital economy, media and creative professionals. Berlin is an ideal base for the development and sales of new content and mobile applications in future-oriented sectors. 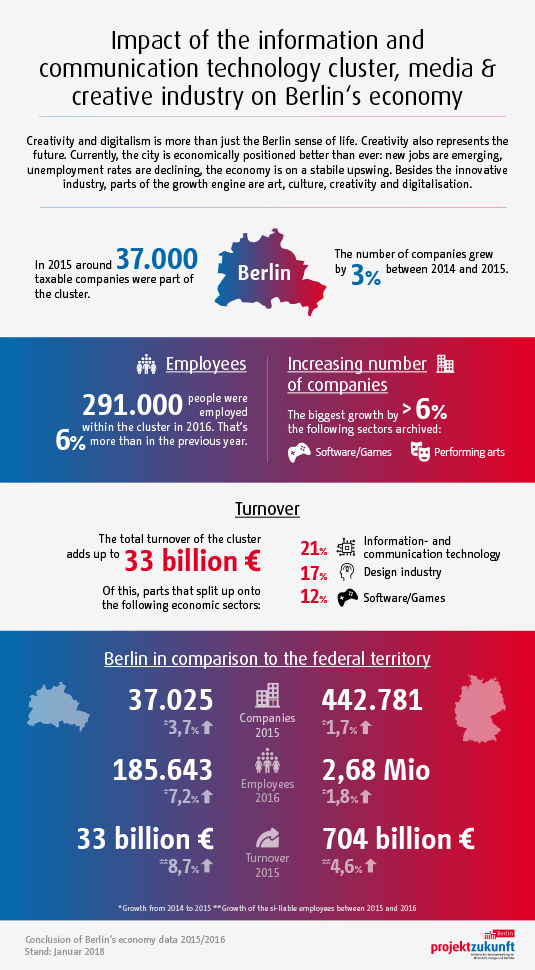