Projekt Zukunft has already been honored several times for its work, i.a. by the Federal Government, the European Commission and UNESCO. These honors acknowledge the results and significance of the Berlin State Initiative for the ICT, Media and Creative Industries in the capital region. Project Zukunft is also highlighted as a best practice example in numerous studies and surveys. According to an inquiry commissioned by the European Parliament, the state initiative is a model example of the use of European structural funds for economic development, especially in the field of cultural and creative industries.

The Berlin Fashion Week online portal, commissioned by the Senate Department for Economics, Energy and Enterprises, has been awarded with three prestigious awards.

At the German Design Awards, the portal convinced a jury of internationally renowned design experts. The Award of the German Design Council annually awards top-class submissions from product and communication design. The award ceremony took place in February 2016 as part of the international Ambiente trade fair in Frankfurt am Main.

The Berlin Fashion Week portal is also one of the winners of the 2016 Annual Multimedia Award and receives the "SILVER" award in the category "website". The Annual Multimedia Award has been presented since 1996 and is a trendsetter in the field of digital brand communication. In 2017, the portal was once again awarded with the Silver Fox Award.

The Unesco Creative Cities Network and the Chinese city of Shenzhen launched a design competition in the fall of 2013, involving 11 design cities worldwide. Among the winners of the competition are the Berlin design label "enfant gate", the fashion designer Bobby Kolade and Berlin (Senate Department for Economics, Energy and Public Enterprises / Projekt Zukunft) for the best submissions. Berlin has thus won the most prizes in all cities participating in the competition. The state initiative Projekt Zukunft, which organized the pre-selection in Berlin, is pleased about the award as "Best Nominator" together with the designer and jury member Michael Michalsky.

The Berlin design label "enfant gate" won the "Merit Award" worth $ 5,000 for its starter kit for newborns. All garments are made from 100% GOTS certified organic cotton. The starter kit was developed together with maternity clinics and has already won numerous awards in Germany.

Bobby Kolade, who only won the fashion competition Start Your Fashion Business in the summer of 2013 in Berlin, is awarded the "New Star Award", which is also endowed with 5,000 US dollars.

Projekt Zukunft was honored on December 14, 2012 in Berlin by the Initiative Kultur- und Kreativwirtschaft of the Federal Government with the title "Bewegungsmelder 2012". 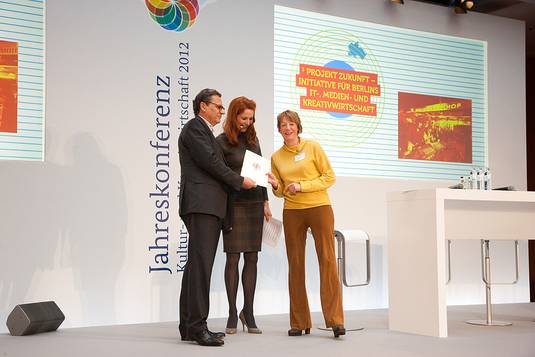 Each year, the "Bewegungsmelder" awards an outstanding initiative from each of the 16 federal states and presents it to a broad public. Projekt Zukunft won the award for Berlin in 2012, making it the initiative that has "moved" the capital's cultural and creative industries. The title "Motion Detectors - Initiatives that move" recognizes national initiatives that have rendered special achievements in the cultural and creative industries of their state. Central evaluation criteria are self-initiative, networking, public relations, market orientation and innovation. Project Zukunft has made a name for itself among other things by the interdisciplinary networking of the creative industries with the ICT industry, thus promoting innovations in Berlin. The award was presented by the Parliamentary State Secretary to the Federal Minister of Economics and Technology, Hans-Joachim Otto, at the annual conference of the Initiative Kultur- und Kreativwirtschaft.

The cluster management of the Berlin State Initiative Project Future was awarded with the "Bronze Label" in November 2012 by the European Cluster Excellence Initiative (ECEI). In this way, ECEI recognizes the management of the Information and Communication Technologies (ICT) cluster, which is responsible for Project Future. The certificate was awarded on the basis of a benchmarking report by the Consulting and Analysis Institute VDI/VDE-IT, which examined the work of Projekt Zukunft and the TSB Innovation Agency. The Bronze Label is the first such label at EU level. It was developed on the initiative of the European Commission and is regarded as a proof of quality for excellent cluster initiatives. The certificate is recognized and accepted throughout Europe.

Berlin was the first German city to be awarded with the title "City of Design" in January 2006 by the United Nations Educational, Scientific and Cultural Organization (UNESCO). Berlin is part of the worldwide network "Creative Cities" of UNESCO. This selected network also includes cities such as Buenos Aires, Shanghai, Nagoya, Seoul and Montreal. The state initiative Projekt Zukunft initiated the application and represents Berlin in the network of the Design City 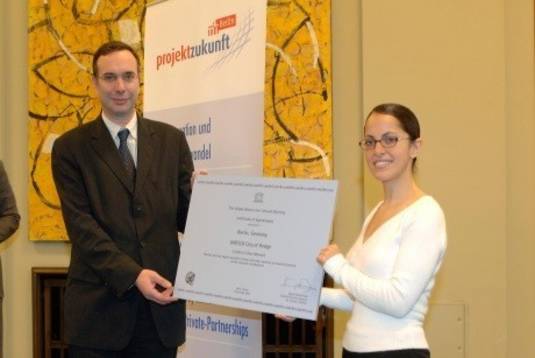