In the beginning, there was ADAM. In 2016, the project (abbreviation for "Expansion of digitisation in facility management") was one of the first projects of Deutsche Bahn (DB) in the field of IoT (Internet of Things): Today, 2,100 lifts and 1,000 escalators at over 5,400 stations throughout Germany report their status in real time. In case of defects, they automatically initiate the repair and therefore ensure that they can be put back into operation more quickly. Furthermore, each customer can find out at any time what condition lifts and escalators are in via bahnhof.deand the "DB Bahnhof Live" app. ADAM has now found a successor in the„FaSta - Station Facilities Status” project, and DB is already working on the next intelligent solution: Sensors in the approximately 12,000 station clocks in Germany are to report via an IoT radio network based on the LoRa protocol (Long Range Wide Area Network) whether the hands are moving correctly, moisture has entered the clocks or glass has broken. Additionally, the clocks could use Wifi signals to determine how many people are in their immediate vicinity. DB is currently conducting pilot studies at the Berlin stations Bellevue and Jannowitzbrücke, among others. The aim is not only to avoid defective watches in the future. At the same time, DB expects to save costs for the operation of the clock systems.

Whether to increase efficiency in operation and maintenance, to monitor the stability of bridge structures, to increase comfort by adjusting building technology systems to the individual user, or to share status data that enable the exchange of electricity in the neighbourhood and therefore lead to cost savings - the potential for digitising buildings for operators, administrators and users should not be underestimated. This was confirmed by a recently published Study of the Technology Foundation Berlin. In addition, pressure is growing in the building sector in particular in view of the climate crisis, more than 40 per cent of the total primary energy (Note: the energy that is available with the originally available energy sources, such as fuel like coal or energy sources such as the sun). The savings potential alone through digitisation and therefore automation of the heating systems is estimated to be 14 to 26 percent according to the simulation study of the Fraunhofer Institute for building physics (IBP).

Smart Buildings: Out of the boiler room

Not least in view of this high benefit, "intelligent building technology has left the boiler room," explains the study by the Technology Foundation. The components for networking everyday objects and machines - from sensors to software - were available. Only the framework conditions lag behind the technology, as is so often the case. There were still a number of challenges to be overcome here: There was a lack of interfaces, just as there was a lack of specialists. Additionally, the possibilities offered by modern systems are often not sufficiently exploited. Not even every fifth building in Germany is up to date today in terms of the current state of technology. In addition, as in all areas of digitisation, adequate data protection and use in conformity with it must be ensured. Regardless of this, however, so-called Smart Buildings, in which a large number of sensors and devices supply important data and execute intelligent controls, are already perceived today as one of the greatest development opportunities for the Internet of Things market of the future. And it has considerable growth potential. eco, Association of the Internet Industry and Arthur D. Little forecast forecast a market volume of almost 17 billion euros for the German IoT market in 2022 and annual growth of 19 percent at the end of 2017. 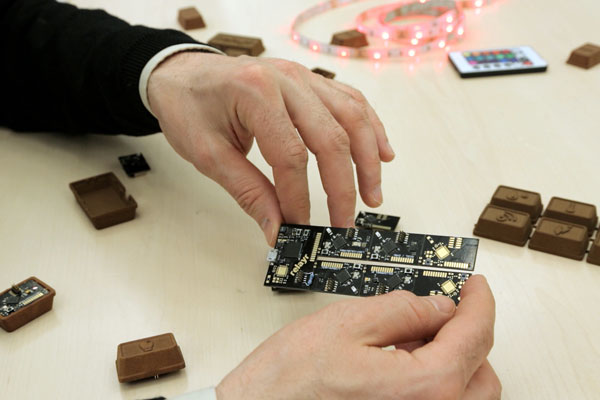 Just as smart building applications are regarded as a central part of the IoT, Berlin is un-disputed as the capital for the development of intelligent building systems. The reasons for this are obvious - or rather in the numbers: 263 IoT start-ups and companies as well as 82 other players, such as research institutions, are active in Berlin - a complete list can be found here. This is the result of an IoT location analysis by Goldmedia GmbH on behalf of the Senate Administration for Economy, Energy and Business (SenWEB). The start-up relayr, which provides the sensors for DB's intelligent clocks at the two Berlin stations is just one of them. Founded six years ago, it attracted attention for the first time in 2013 with the invention of the "Wunderbar" (Wonderful) and has already been featured on Projekt Zukunft. With the small sensor package, which looks like a chocolate bar, temperature, humidity or ambient noise could be measured. The supplied software linked them and could be used to develop apps - such as a remote control for the smart TV. Meanwhile the start-up has grown: Instead of playful applications, the 200 employees at locations in Berlin, but also in the USA, Great Britain and Poland equip Schindler lifts with sensors. The company, which was acquired in 2016 by HSB, a US subsidiary of Munich Re, for a valuation of USD 300 million, is providing software for analysing the data obtained and advising on digital transformation. For example, service teams can be sent to the lifts "on demand". Additionally, the findings from the data can help to improve future installations. The maintenance of lift and therefore smart building systems is not relayr's only field of activity. The start-up, which has a financing of no less than 70 million dollars, is also making its IoT technology available to industrial customers in other sectors. For example, it attaches sensors to the machines of a large German beverage bottler. The sound of the knives cutting off the labels indicates when they are worn out and need to be replaced. This in turn enables savings in production and maintenance. Relayr promises both to its cus-tomers, including such big names as General Electric and Cisco, not only when it comes to the use of the IoT solutions it offers. Supported by its parent company Munich Re, it even offers a financial guarantee.

Even though relayr's success story is certainly one of the biggest in the domestic IoT industry, the company is not alone: A total of 405 relevant players were identified by a Goldmedia research within the framework of the „Analysis of the IoT location Berlin-Brandenburg 2017“ commissioned by the Technology Foundation – 345 in Berlin and 60 in Brandenburg. In the German capital in particular, these are predominantly start-ups or SMEs that have only come onto the market in the last five years and show their expertise in various fields. The company „Ververica“, which was originally involved in the development of the big data framework Apache Flink under the name "data Artisans", has specialised in streaming processing platforms. These enable companies to manage their real-time data applications and respond to changes. Meanwhile Ververica, which was recently taken over by the Chinese cloud provider "Alibaba", has released version 1.4.0. The lighting and electronics specialist „HELLA Aglaia“ uses the IoT at least as successfully, albeit in a completely different field. The company, whose subsidiary specialising in image processing and software solutions is based in Berlin, has been developing hardware and software that enables machines to see intelligently for years. Under the premise of "good sight and good visibility in every situation", camera-based driver assistance systems already make it possible today to record and evaluate the lighting situation in the vehicle environment and to report this to the vehicles, which in turn take appropriate measures. With its innovative lighting systems. HELLA Aglaia is also part of the project „SAFARI“. This is a cooperation between partners from administration, research and industry: On a digital test field in the district of Berlin-Reinickendorf, high-precision map material is to be produced which is regarded as a basic prerequisite for safe, efficient and sustainable mobility in the future. The map material will not only receive information about lanes or traffic lights but will also be continuously corrected and supplemented by updates from automated vehicles. 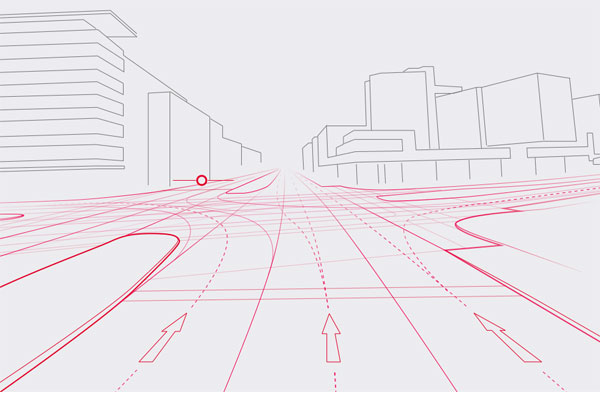 Smart through cooperation and promotion

Cooperation, as with the digital test field, is also a priority on the Bosch IoT Campus. More than 300 employees work in Berlin-Tempelhof mainly on projects related to IoT and digital transformation. From "Elevator Monitoring" to monitoring building equipment on the basis of key company figures - the Group's teams have already implemented more than 250 international IoT projects in the areas of manufacturing, mobility, energy, smart home & building and smart city. But the IoT Campus is not only open to Bosch employees and customers; the entire "IoT ecosystem is to be united in one place," according to the website. The Bosch IoT Campus offers plenty of space and opportunities for exchange so that it does not just remain a noble goal: For relevant events on the Internet of Things, such as those offered in Berlin by a whole series of groups, including meetup.com, the event page iotevents.org or the website of the industrial internet consortiums provide information. The Bosch IoT Academyoffers a further networking opportunity, where interested parties can attend various technical training courses on special IoT topics and business development.

Such a networking of existing experts and training and further education of those who still want to become experts is entirely in the spirit of Berlin itself. Finally, it was important to promote the potential of the numerous talents at the location and therefore the creation of possible new business models in the area of IoT, emphasises the Study IoT in Berlin by the Technology Foundation. Not only from the total of 263 IoT start-ups and companies, but also from within the 82 other players such as research and scientific institutions, incubators, ventures and funding institutions that are active in Berlin. Today, e-learning platforms such as openHPI of the Hasso Plattner Institute, which combines video lectures, interactive self-tests and homework with a social, digital learning space, already exist specifically for the purpose of networking and knowledge transfer. An important starting point in this context are research cooperations, such as the Siemens Center of Knowledge Interchange der TU Berlin (CKI) . In addition to the area of talent promotion, the initiation of joint research projects is a concern of the CKI.

The diversity of the IoT actors makes Berlin the ideal location for the "IoT hub" of the Digital Hub Initiative (de:hub) of the Federal Ministry of Economics and Energy (BMWi) in Berlin. Operated by a consortium of partners from industry and research - including theFactory, Next Big Thing (NBT) and the Fraunhofer Performance Center for IoT- the aim of the initiative, in which the city administration for business, energy and companies is also involved, is to bundle, transfer and ultimately monetise know-how.

In order for companies to actually innovate, something else is crucial in addition to networking and know-how transfer: Barrier-free access to IoT networks, which are open to all user groups for experiments. Although there is currently no web in operation throughout Berlin, the Free Wifi Berlin  project has been creating a Wifi network of over 650 access points since June 2016, enabling free Wi-Fi access at hundreds of locations in Berlin. Additionally, players such as The Things Network (TTN) vor,  ) intend to provide network technologies with a wide reach such as Zigbee or LoRaWAN. The Technology Foundation itself has also announced a Hackingbox IoT-Edition, consisting of a loan gateway, LoRaWAN communication modules and experiment instructions.

In light of all these initiatives, there is no need to worry about ADAM's children and grandchildren in Berlin...